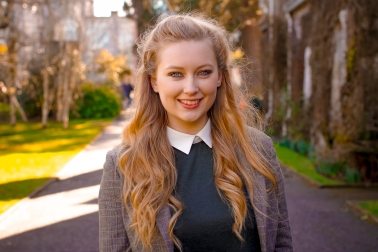 From Co. Limerick, Sophie has been involved in music from an early age. She began learning Irish Traditional music with Sheila Cagney, starting with tin-whistle and then flute. Sophie participated in County and Munster Fleadh Cheoil’s, competing in both solo and group competitions.

Sophie has also been involved in musical productions since 2007, held in various theatres around Ireland. She has performed with Summer Music on the Shannon, and travelled to Galway and Ennis with productions of Bernice Bob’s her Hair (an adaption of F.Scott Fitzgerald’s novel), and Deep Waters. She has held various lead roles such as ‘Nancy’ in Oliver, and ‘Glinda’ in The Wiz, held in University Concert Hall, Limerick.

Sophie attended the Limerick School of Music completing all of her grades both in classical piano and theory, and has performed recitals in St. Mary’s Cathedral and LSM. Sophie completed her Bachelor Degree majoring in Music and English, and continued on to complete a Postgraduate Diploma in Computer Science.